Chert blocks in Bentong-Raub Suture Zone: A heritage of Palaeo-Tethys 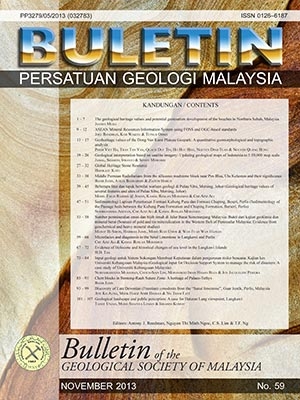 Chert blocks in Bentong-Raub Suture Zone: A heritage of Palaeo-Tethys

Abstract: Bentong-Raub Suture Zone is considered as a collision zone between the Sibumasu and East Malaya (Indochina) terranes. Sibumasu was a part of the Cimmerian plate, which was attached to Gondwana during the Carboniferous. East Malaya was attached to the Indochina plate. From the Devonian to the Permian the Sibumasu and East Malaya blocks were separated by an ocean called Palaeo-Tethys. The closure of Palaeo-Tethys was completed during the Triassic. The major part of the history of the Palaeo-Tethys was destroyed and only a small portion is still preserved in blocks of oceanic sedimentary rocks such as cherts. The chert blocks are exposed in several localities along the Bentong-Raub road (3°35’N, 101°54’E), Gua Musang-Cameron Highland road (4°45’N, 101°45’E) and at a road-cut in Langkap (2°38’N, 102°21’E). The chert blocks consist of thinly bedded chert interbeded with mudstone. Some chert layers contain radiolarians. The oldest chert block found at Bentong-Raub road-cut yielded an assemblage of radiolarians belonging to the Trilonche minax Zone of early Frasnian, (early Late Devonian) age. A chert block from Langkap, Negeri Sembilan yielded radiolarians belonging to the Albaillella deflandrei Assemblage Zone, Tournaisian, (Early Carboniferous) age. Permian radiolarians were retrieved from several chert blocks in the vicinity of Pos Blau, Ulu Kelantan. The youngest radiolarian assemblage in the area is from the Follicucullus monacanthus Assemblage Zone indicating Wordian, (Middle Permian) age. The occurrence of radiolarian chert suggests high plankton productivity during the Late Devonian, Early Carboniferous and Permian. These chert blocks are the natural heritage of the Paleo-Tethys which needed to be conserved as National Heritage sites.