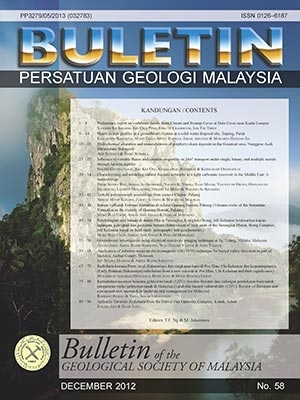 Abstract: A palynological study has been carried out on samples from a well exposed outcrop near Kg. Pejing along the road connecting Chenor and Paloh Hinai in the central part of Pahang. This well exposed outcrop is described as flat interbedded carbonaceous mudstone and sandstone. A palynological investigation of the outcrop section has revealed that the palynomorph assemblages were dominated by typical Tertiary palynomorphs such as Lanagiopollis emarginatus, Discoidites borneensis, Taxodiaceae, Stenochlaena palustris, Asplenium type, freshwater, peat swamp pollen and abundant tricolpate and tricolporate pollen. These palynomorph assemblages suggest the occurrence of ephemeral peat swamp and riparian fringe type environment. The age of the rock succession is probably Late Miocene and/or younger based on the presence of certain stratigraphically significant and age restricted taxa such as Lanagiopollis emarginatus and Stenochlaenidites papuanus.